Our food adventures in Seoul, South Korea were too delicious and fun to fit into one post. If you haven’t read about the first part of our trip, you can do so here.

Not wanting to miss out on the thousands of coffee shops around Seoul, we started off our morning at a coffee shop next to our train station. It’s a local chain with lots of fancier coffee options as well as a whole menu of waffles. We didn’t try the waffles, but they all sounded good (waffles topped with ice cream? Yes please!) I had gotten an Americano the afternoon prior and ended up with a mocha latte in the morning, thanks to a language barrier. It was good, even though it’s not what I wanted, but I liked Colin’s honey latte a lot more.

I was so excited to go to Insadong to walk around the stores and eat some street food. As I mentioned earlier, Seoul is late to wake up and that was obvious when we arrived at 10am to closed stores. Luckily, we didn’t have to wander for too long before everything started opening up. Our first food stop was for these hilarious pancakes.

Yes, those are poop shaped pancakes and they were, surprisingly, really good. We tried a red bean paste (a very common, sweet filling in Asian desserts) and a chocolate filled pancake. We liked the chocolate more but the red bean paste was a close second. 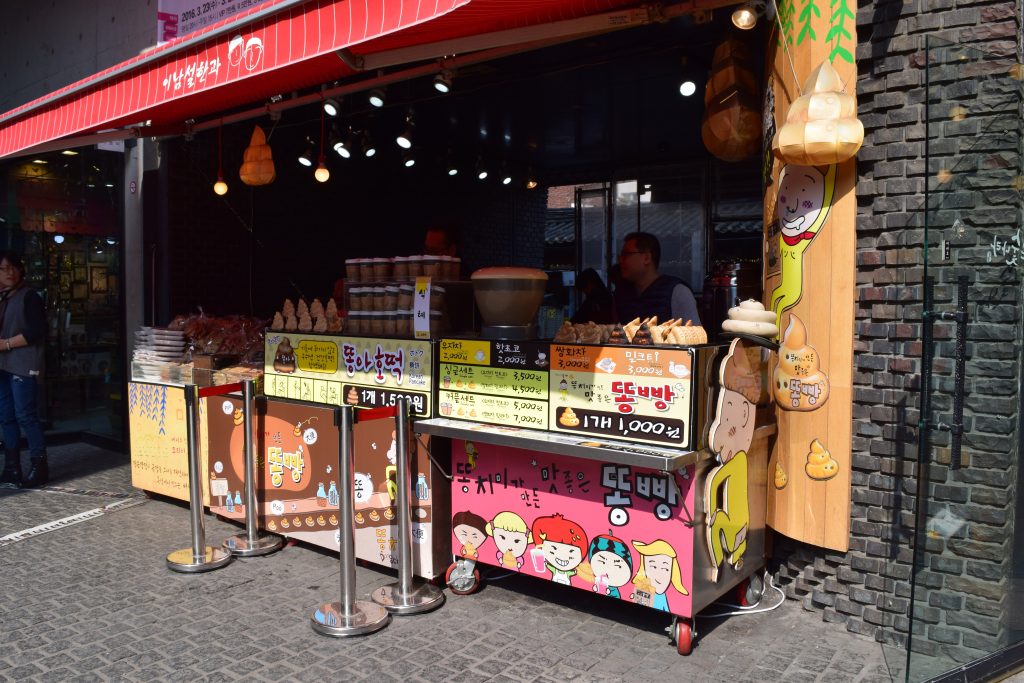 The next sweet treat we found was hotteok. Unfortunately, I wasn’t able to grab a picture before Colin demolished it. It is another pancake like creation filled with a mixture of brown sugar, honey, chopped peanuts, and cinnamon. 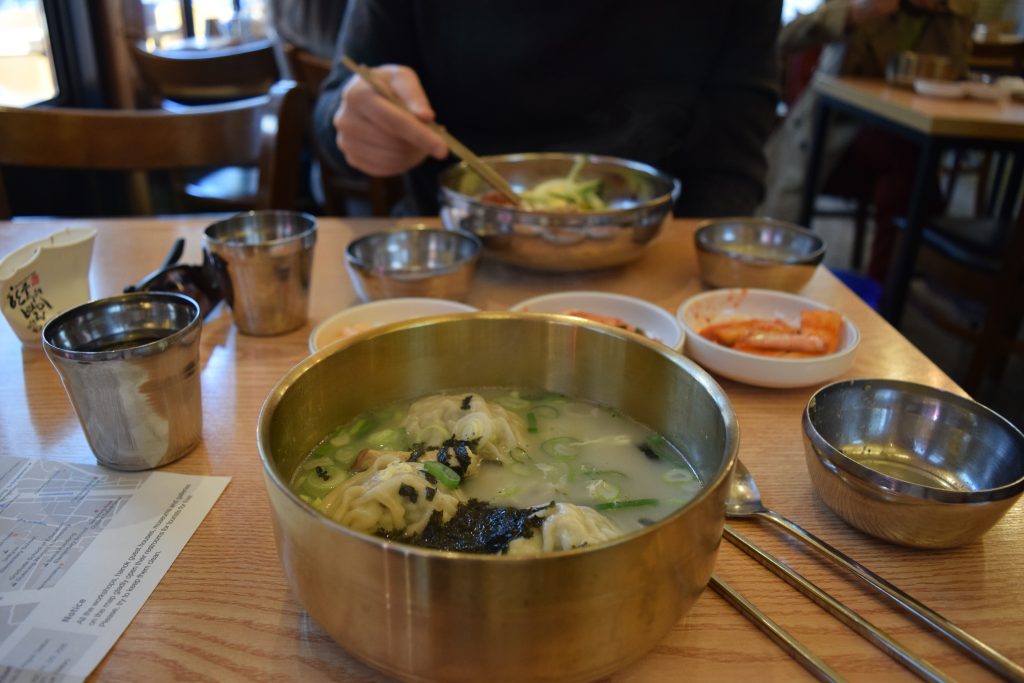 After all of those sweets and a small amount of shopping, we were ready to find lunch. There are an overwhelming amount of restaurants in Insadong and most that we walked by had picture menus. Luckily, Colin had a craving for noodles, which narrowed down our choices significantly, otherwise I don’t think we would have ever decided on a place! We found a little noodle shop down one of the allies of Insadong. Unfortunately, I did not take a picture of the sign so I don’t know what it was called. There were only five or six dishes on the menu. I opted for a dumpling hot pot and Colin had spicy noodles. There was English on the menu, thankfully, but not a lot so we hoped for the best. We were served kimchi and a few other banchan before our main dishes arrived. Mine turned out to be a broth with green onions, seaweed, mushrooms and large pork dumplings. Needless to say, it was delicious. Colin’s was thin noodles covered in a spicy, sesame sauce and served cold, which surprised him at first, but he quickly decided he liked it. 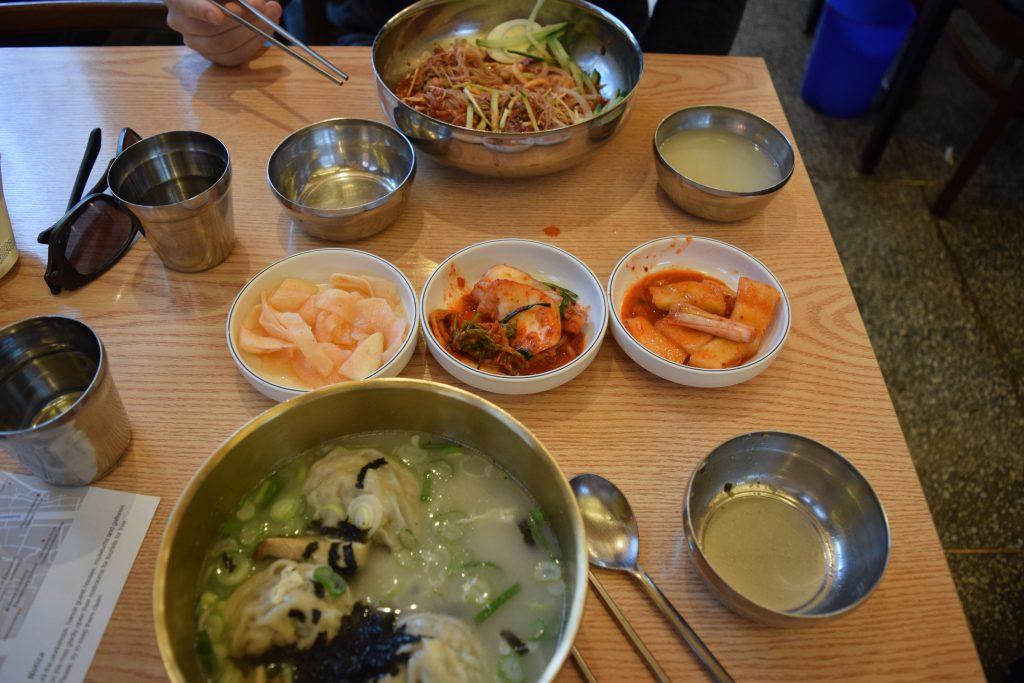 One difference from Japan that we noticed in Seoul is all of the restaurants have metal chopsticks. We found that it was more difficult to grip food with the metal chopsticks, so food slips through easier, and the chopsticks are balanced differently than the wooden chopsticks we are used to using in Japan. Maybe it was just us that noticed this change, but it definitely caused for some funny eating scenarios, especially when noodles were involved! 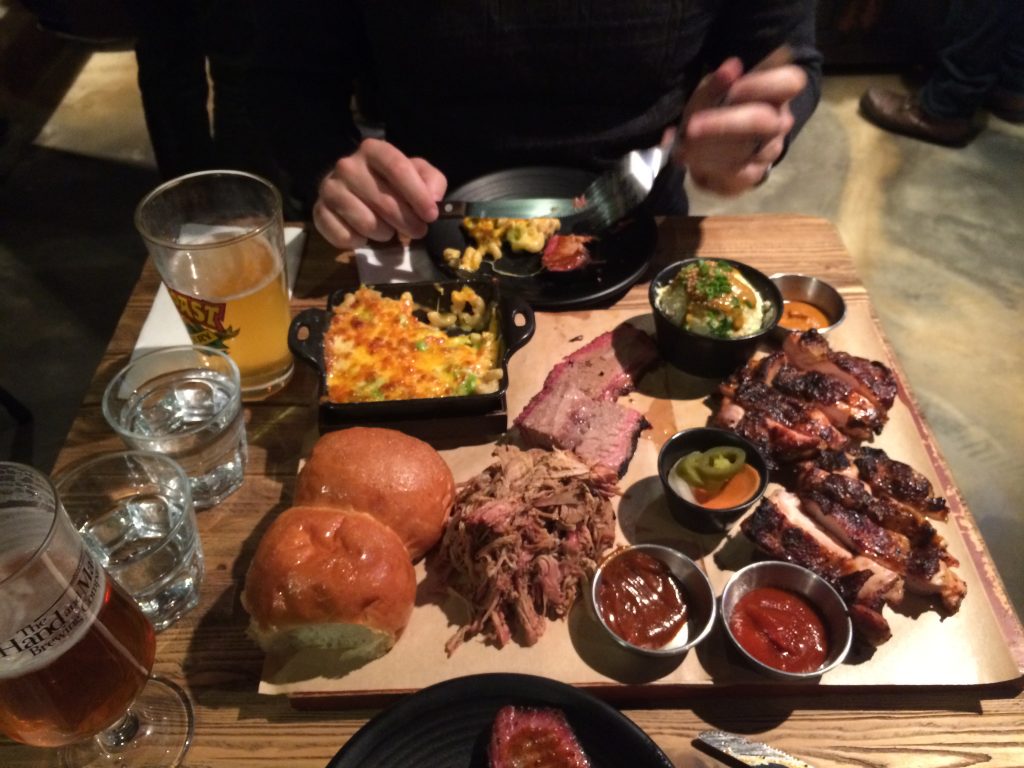 We’re equally as deprived of good BBQ here as Mexican food, so we decided on that out for our last dinner in Seoul. The well known BBQ place in Itaewon was full, so we decided to search out a different place instead. When we walked in to Manimal, the smell of smoking meat was overwhelming. After being seated in the wooden walled, small, but very popular, restaurant, we noticed that the smoker was in a glass walled room right next to us. No wonder we could smell it! The food is served family style so we decided to get a few meats, more specifically pulled pork, brisket and smoked chicken, to share. All of the meats were superbly smoked, and although the sauces were nothing to write home about, they complimented the flavors well. The side dishes, especially the green chili macaroni and cheese, were delicious too. Needless to say, I walked, or rather, waddled, out of the restaurant extremely satisfied and full. 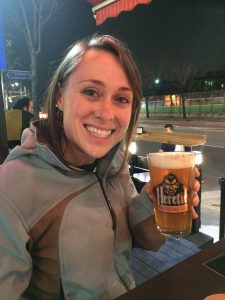 Unable to pass up our last opportunity to find good beer for awhile, we made our way to White Rabbit Tap House after dinner. They have an outstanding number of beers on tap, many of which we recognized from the U.S. Colin found one of his favorites and I had no choice but to get the ironically named Evil Twin Brewery’s red ale. Along with the many beers along the walls, it was also decorated with white rabbits and other characters from the popular Disney tale.

We only had a short amount of time on our last day in Seoul, so we just grabbed coffee and pastries from the hotel again for breakfast. 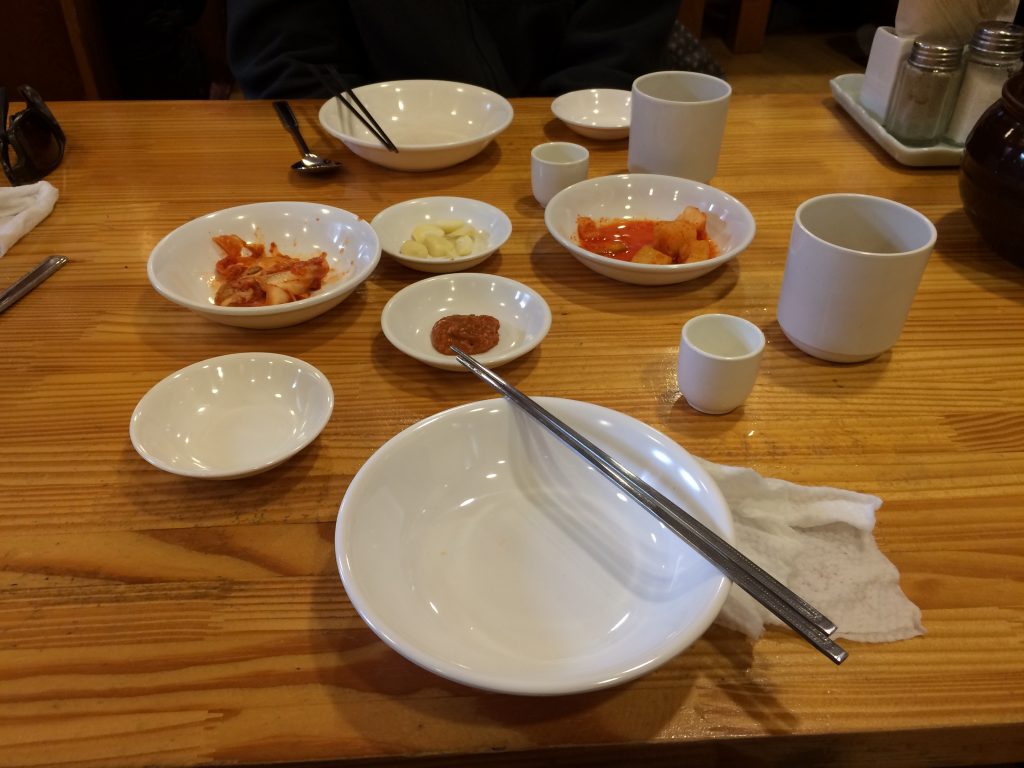 When we found ourselves hungry after touring Gyeongbokgung Palace, I knew just the place to go. Tosokchon is a very popular restaurant housed in one of the traditional, Korean homes, called hanoks, and just a few minutes away from the palace. Luckily, when we arrived, there was no line (usually it goes down the street). We were quickly ushered inside of the hanok, which turned out to be multiple large rooms around a courtyard, and shown to a room full of long tables and tatami mat seating. We took our seats and grabbed a menu, not realizing that, because the menu only had four items, we needed to order immediately. It was amazing to watch the staff work, since the restaurant was so busy. We were entranced for awhile, especially since they gave us a shot of soju when we sat down, until we noticed that everyone around us had food and the staff was not responding to our bell for service (we later realized that, even though each table had an electronic bell, it did not specify on the server side whose bell was ringing). Since we only spoke a few words of Korean, we had no idea how to get their attention. Luckily, a woman next to us noticed that we had no idea what we were doing and that we didn’t have any food. She quickly called the servers over to us and started yelling at them in Korean. Wouldn’t you know, a few minutes later we had ginseng chicken soup, called Samgyetang, in front of us. We said “thank you” to the woman who helped us, fortunately we did know that phrase, and began eating. 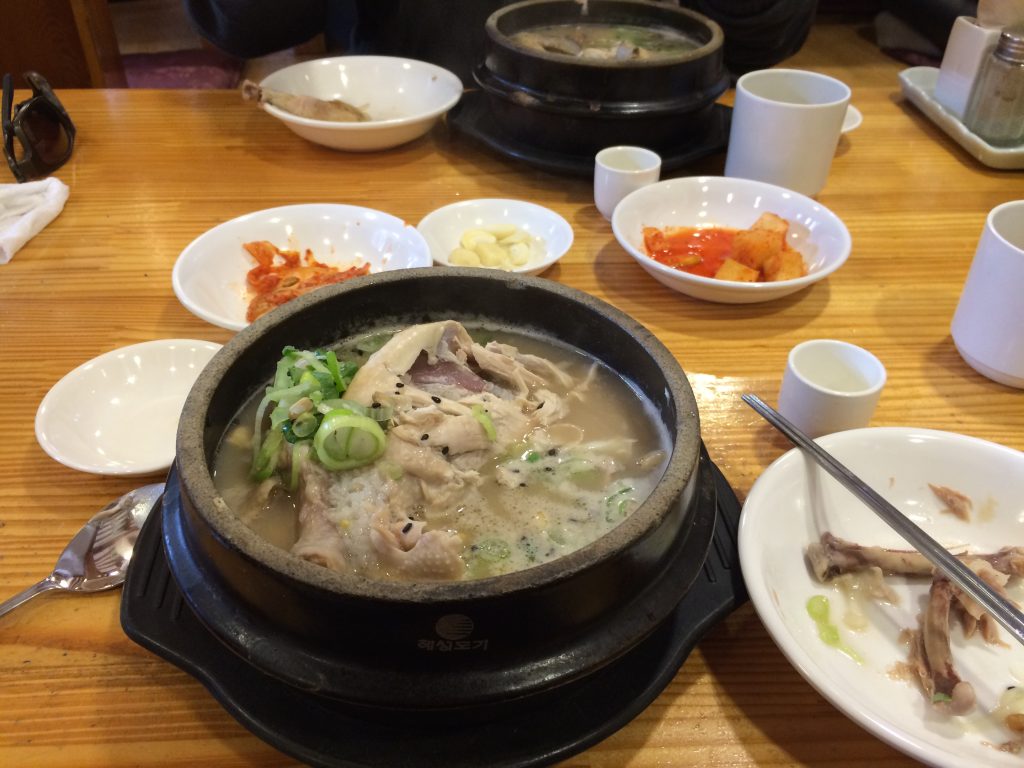 Each soup bowl was filled with broth and had an entire chicken stuffed with rice, dates, garlic, ginger and many other spices. The chicken was so tender it fell apart with the touch of a chopstick. We sloppily ate our soup (see the comments above about metal chopsticks) but it was so good that we did not care that we were making a mess. I’m pretty sure everyone else was too. We had also ordered pajeon, a seafood and green onion pancake, which was huge and equally as delicious. After we ate as much as we could, we took our check up to the cashier in the lobby area to pay. As we left, we noticed the line wrapping down the street. We were glad for our early arrival and memorable, funny lunch.

As a side note, even though some people may have been frustrated in this situation, we laughed at ourselves throughout most of it. After all, we are the ones who don’t speak the language or know the customs. We have become accustom to being foreigners and dealing with communication barriers, but it is still important to remember that, whoever is helping you, is probably speaking English as their second language. Patience and understanding, as well as being polite, is key. Learning a few common phrases in the country’s language always helps too.

We had to say goodbye to Seoul after lunch to head back to Oki. Hopefully we’ll return again some day soon!