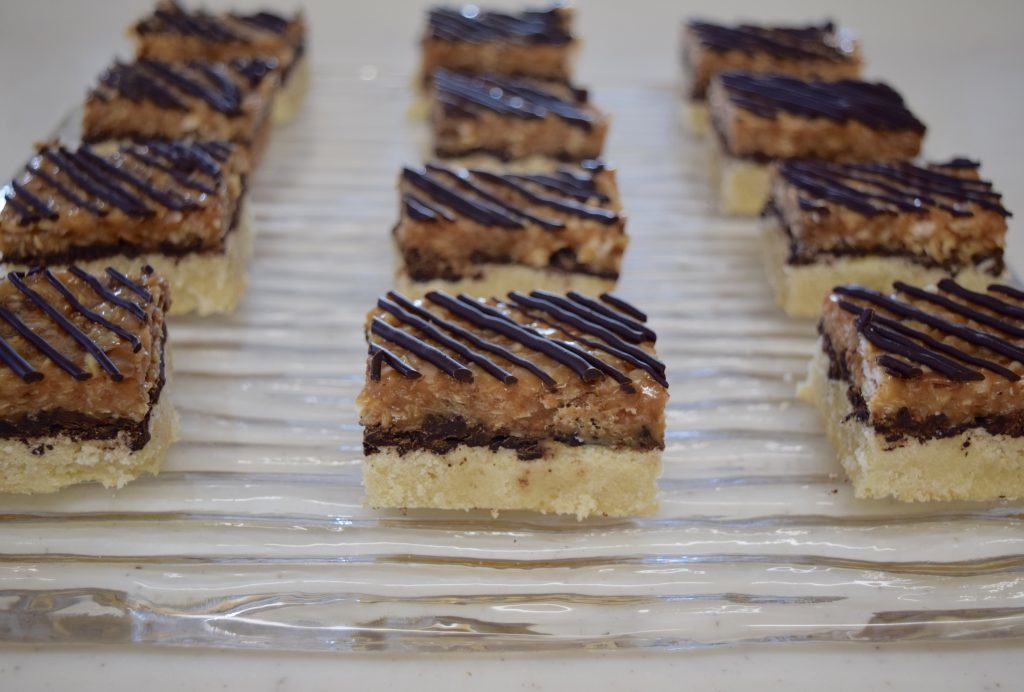 There are a few short weeks in February when Colin and I debate about how many boxes of Girl Scout cookies is a reasonable amount to buy. Sadly, no matter how many boxes that ends up being, they never seem to last long enough. Hence why I’m writing about Girl Scout cookies in July. But, we don’t just argue about how many boxes to buy. We also disagree on which cookie is the best. My favorite has always been Thin Mints. Colin’s favorite are Samoas (or, where I sold Girl Scout cookies, Caramel Delights). I have not always liked Samoas. Actually, I remember avoiding them when I was younger. Most of that dislike came from my dislike of coconut. Now, coconut is a flavor that I am slowly starting to love.  I don’t know if it’s because we live on a tropical island, or if it’s becoming more of a food trend, but it seems like everything comes in coconut flavor here. And, slowly but surely, I find myself ordering the coconut option more and more. 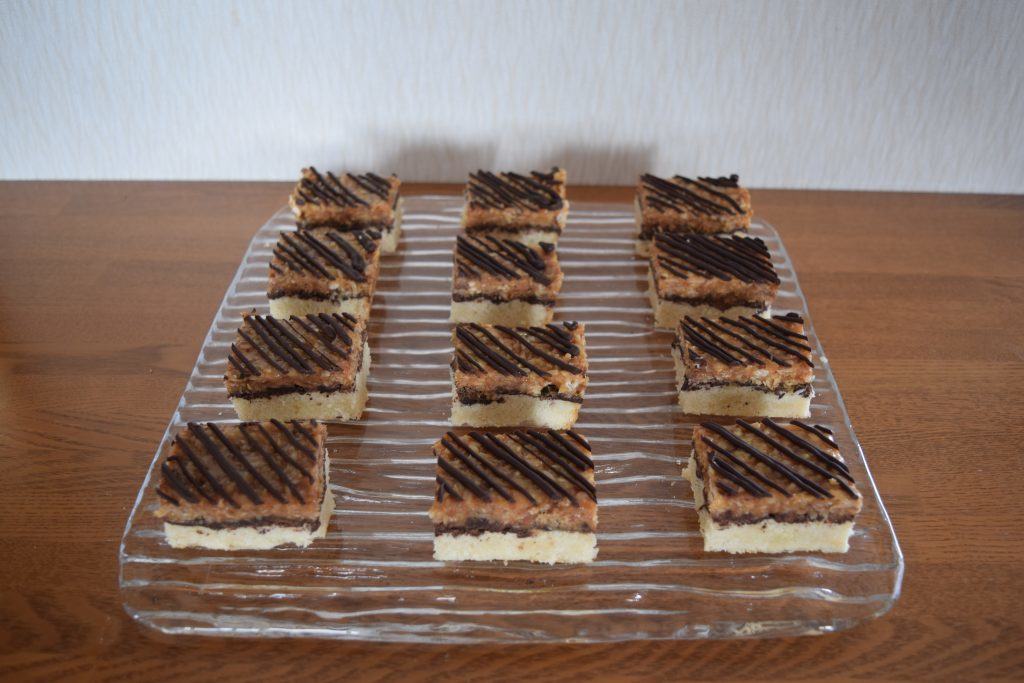 When Girl Scout cookie season came around this year, of course we bought a box of Thin Mints and Samoas. But this year, unlike previous years, I really liked the Samoas. Unfortunately, they still had that processed cookie taste to me (not to mention that Colin ate the whole box) so I knew the next, logical thing would be to make a homemade version. (I admit, maybe it’s just me that thinks that way, but you all are benefiting now!) I remembered seeing a recipe for homemade Samoas on one of my favorite blogs from a few years ago and figured I would give it a try. If the packaged Girl Scout version is good, the homemade version has to be better, right?

Turns out, I was right. These bars are incredible. The shortbread base is thick, buttery and dipped in bittersweet chocolate. That is topped with a caramel and toasted coconut mixture and finished with chocolate drizzle. The caramel, toasted coconut topping is so delicious, you could make it on its own and eat it with a spoon (or sneak a spoonful out of the bowl, I won’t tell).

With this recipe around, we will not need to wait until Girl Scout cookie season to have Samoas again. In fact, Girl Scouts everywhere should be afraid, or at least find something else to sell this year besides cookies, because I don’t think we’ll be buying Samoas ever again.

To make the chocolate layer the base:

To make the chocolate layer the middle layer:

1. Although the chocolate layer on the bottom is more traditional (last picture), I found that it was difficult to transfer the shortbread onto the melted chocolate and mine broke in a few places. It was easy to fix, and seamlessly fit back together once chilled, but I found it was a lot of work for not much of a flavor difference. Putting the chocolate layer in the middle (top two pictures) was much quicker, even though the shortbread seemed to crumble more when eating, and gave the coconut mixture something to adhere to. Both methods are listed in the instructions. Feel free to make them whichever way you prefer!
2. I increased the original recipe to fit into a 9 x 13 inch pan for a higher yield. For a smaller yield, a half recipe can be made in an 8 x 8 inch pan or two-thirds of the recipe in a 9 x 9 inch pan. Baking time for the shortbread may decrease slightly.
Recipe from Annie's Eats
Serving Size: 1 bar Calories: 342kcal Carbohydrate: 41g Fat: 18g Protein: 3g